Skip to content
Previous Next
The Whisper – from Pastor Jeff 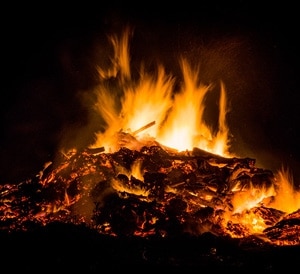 I absolutely love studying individuals in the Bible and how they interacted with God. Remember…these were “real” folks with “real” emotions and issues.

Two of my favorites are Elijah and Elisha. (I even named my middle son Elisha because I wanted him to have a double portion of wisdom and peace in his life.) Elisha was known as the prophet of PEACE. Many of his miracles were modest deeds of compassion. Elijah was known as the prophet of God’s wrath. By contrast, his miracles were dramatic and judgmental on apostasy….yet a Whisper changes his life! The complexity and dichotomy of this conversation is so awesome.

I think in pictures, so let me set the stage for you….Elijah has been challenged to a “duel” if you will…..a challenge between His God and 450 prophets of Baal.

As he sits at the foot of this “desert” mountain, and he hugs his knees to his chest, he is wondering what spectacular event will announce God’s arrival.

Looking at him you may think he has fallen asleep or has even lost interest in this game….but he hasn’t….he is reliving the past week’s events….he allows a little smirk to cross his face as he recalls intensely praying for the spirit of the ONE true God to rest on him again.

He thinks on the faces in the crowd that gathered around the base of the mountain….the thousands of people….some had come from miles away.

But that is not why Elijah is here. He is at this MOUNTAIN of God, and he is waiting for God.

It shouldn’t take long….he has always had an appointment with God….God had told him to meet here and he would always show up and save the day.

So Elijah must sit and wait. And he waits….

Back to the Battle….Elijah vaguely remembers looking up at the scoreboard…. it showed: 450 prophets of Baal against 1 prophet of God.

Simple Rules: Both sides would prepare a bull for sacrifice. The first prophet to get their God to send fire from heaven and burn up the bull wins.

He thinks in disgust as Israel has abandoned the living God and killed all of the prophets except for himself. The Israelites in the stadium were not cheering for Elijah, they were cheering for the prophets of Baal. They are hoping to rid themselves of this last prophet.

The prophets of Baal start the contest by calling to their god, chanting back and forth, “We love Baal, yes we do; we love Baal how ‘bout you!” They continue to yell for a couple of hours, but guess what? No fire. So they began to cut themselves and dance about like idiots.

After several uneventful hours pass, Elijah walks up to the competition and says:

“Excuse me, gentlemen. I see that nothing has happened here. Maybe I could be of some help to you, you know, one prophet to another. Maybe you need to shout a little louder. Maybe your god is taking a siesta or on vacation so …….ahhhh yeah, just yell a little louder, dance harder, and cut a little deeper…..it just might work.”
With a wink and a nod he walks away to his given area in this arena.

He knew it made the prophets mad, but who cares…God has always had his back. After about 8 hours had gone by, all 450 prophets were lying on the ground exhausted…..all the dancing, all the yelling, all the cutting had done nothing….they yelled “maybe no GOD will show up today!”

It’s time to get down to business.

Elijah steps up to the altar and rebuilds it, but he also remodels it a bit. He asks for 12 large stones, explaining to the audience that each stone represents one of the 12 tribes of Israel; they represent the people who are standing and watching this contest.

Elijah surprises the crowd by digging a trench around the altar. He calls on members of the audience to go and get four large buckets of water and then pour them on the altar not just once ……but three times….he sees the crowd begin to stir….why would he do this? Why would he pour water on something that he wants burned?

Elijah wanted to prove there are no special effects. It is God who will provide the awe-inspiring answer…not man. He steps back and prays for God to show his power.

No sooner does he say “Amen,” when “BOOM!” Fire comes down from heaven and burns up the sacrifice, the wood, stones, soil, and all the water in the trench.

They had EXECUTED all 450 prophets of Baal.

He relives these moment over and over again in his head…fire…consumed rocks….

But he is here, alone, because of a note from Queen Jezebel.

“May the gods punish me terribly if by this time tomorrow I don’t kill you just as you killed those prophets.”

So….. Elijah ran. He ran for his life…. he ran here….he knows God’s glory will show up!

But it could be a long wait. This time Elijah doesn’t have an appointment. God didn’t call him here, he just showed up.  What if he has ran so far that he has ran out of God’s will……..No….No….shake that thought off….have FAITH….He will show…there will be a big boom and I will see him…there will be fire and that is how I will know!

So Elijah must sit and wait. And he waits….

God simply says “Elijah! This is God….go outside.”

That is when he hears what sounds like a TRAIN. It’s powerful and getting closer. He turns in the direction of the noise to see a WINDSTORM blowing that looks like a TORNADO. As it comes closer, Elijah watches.

Terrified, Elijah says, “God, I know that is you?”

But God was not in the wind.

It is then that the ground begins to shake violently. So violently that boulders the size of horses begin to roll down the mountain. It is a shaking like no man has experienced before….or since….

But God was not in the earthquake.

Then Elijah sees something familiar. The skies open up. Fire, greater than any he has ever seen…. Elijah knows he’s got this one right, and he screams in confidence, “Surely God, this is you.”

But God was not in the fire.

Elijah can’t figure it out. Since he was a child, he heard the stories of how God made himself known to His people…earthquakes…fire…wind.

At that moment, a gentle LITTLE breeze passes by. Elijah gasps and humbly covers his face. Because it is in this little breeze that Elijah finds the greatness and fullness of God. And now he understands….

Are you so enamored with the winds of worship……that you can’t stand still in his presence?

Are you so awed by the rumble of praise….…that you can’t rest in the arms of your father?

Are you so accustomed to living off the fire of the preacher……that you can’t hear the whisper of His voice?

Then what are you waiting for? Stand still in his presence….rest in His arms…and allow Him to whisper His thoughts and dreams into your life. Many times He does not show up through the passion…through the fire…the big signs…

Many times He simply wants to whisper His WILL into your life.